Spiritual Children of Fribourg: Lithuanians at the University of Fribourg and Their Importance for Lithuania: Catalogue 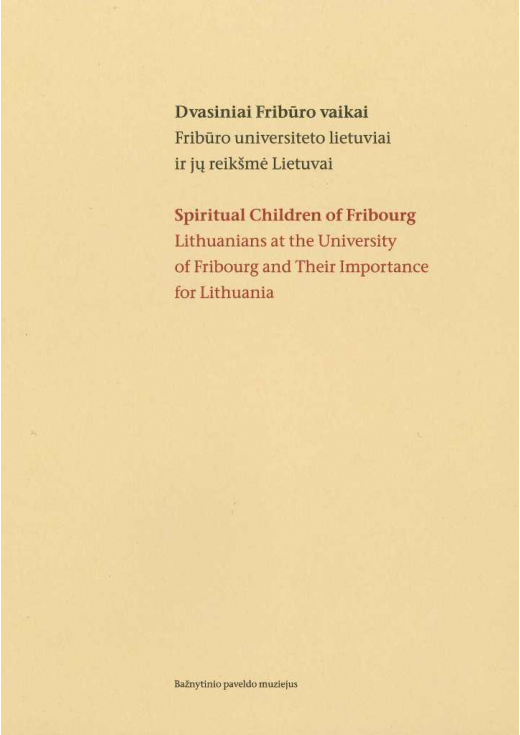 Spiritual Children of Fribourg: Lithuanians at the University of Fribourg and Their Importance for Lithuania: Catalogue. Compiled by Kamilė Jagėlienė. Vilnius: Bažnytinio paveldo muziejus, 2019, 112 p.

The catologue of the exhibition is the first attempt to present for the public the intellectual activity of Lithuanians who studied at the Catholic University of Fribourg in the late 19th and the first half of the 20th century and their importance for the fledgling modern state of Lithuania through the activity of the Rūta–Lituania student society and related artefacts.

The significance of the University of Fribourg for the formation of Lithuanian statehood is beyond doubt. It was one of the most important hubs attracting Lithuanian Catholic intellectuals, priests and lay people alike. Here they began to crystallise their ideas and make international contacts, and it was in Switzerland where they became actively involved in building the modern state of Lithuania. The majority of them defended their doctoral dissertations in Fribourg, often becoming the first in their field in Lithuania: theologian, Vilnius bishop-to-be, Blessed Jurgis Matulaitis, philosopher and rector-to-be of Vytautas Magnus University Stasys Šalkauskis, writer Vincas Mykolaitis-Putinas, historian Jonas Totoraitis, historian and teacher Marija Andziulytė-Ruginienė and many others. The Swiss Joseph Ehret, who got acquainted with Lithuanians during his studies in Fribourg, received Lithuanian citizenship in the interwar period and actively worked for the benefit of Lithuania, should be mentioned separately.

The catalogue is published in Lithuanian and English.

FUNDING FOR THE MUSEUM IS PROVIDED BY