The Star is Alight! Nativity Scenes from the Alps to the Baltic Sea 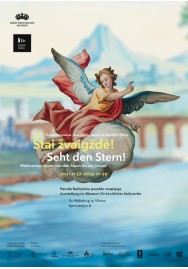 The exhibition of the Church Heritage Museum and the Diocesan Museum Freising (Bavaria, Germany) encompasses 29 items (20 from Germany and 9 from Lithuania) coming from museum collections, churches and private collectors. The exhibition presents the traditional way of depicting the birth of Jesus Christ in the Alpine region and in Lithuania. The oldest reliefs, paintings, Nativity scenes and sculptures dating back to the 14th century have symbolic iconographic accents, while the works of professional artists and modern pieces demonstrate the variety of interpretation possibilities of this theme. The gem of the exhibition is the Bavarian and Tyrolean Nativity scenes of impressive size encompassing hundreds of figures that have been supplemented and expanded throughout the decades and that are intended to localise the birth of Jesus by relocating it to the homeland of the spectators. A strong cult of the Infant Jesus previously existing in southern Germany is represented by little sculptures brought from the convent of Ursuline Sisters in Landshut, Bavaria. Novices were given them as presents from their families before entering the convent. These sculptures dressed in luxury clothing and jewellery were called “comforters” because they were meant to help the future nuns to ease the pain of separation from their families. The exhibition presents the oldest Gothic work of plastic arts in Lithuania: embossed ivory panels engraved with evangelical scenes including the Nativity scene, which is also the oldest depiction of the birth of Jesus in our country. Another exhibit is a Nativity scene from Gruzdžiai Church of the Holy Trinity that was made in late 18th or 19th century and is distinguished among the few surviving traditional Lithuanian wooden Nativity scenes by its age, vivacious originality and artistry. The exhibition also includes the smallest (1/3 of a millimetre) nano-Nativity scene in the world by Vilnius Tech ‘LinkMenų Fabrikas’ of Vilnius Gediminas Technical University and partners.


The birth of Jesus Christ is one of the fundamental events in the Christian liturgy. The first attempts to give Christmas a sculptural shape can be seen on Christian sarcophagi from the 4th century AD but it was St. Francis of Assisi (c. 1181/1182–1226) who made this event particularly significant. Wishing to directly experience the joy of Infant Jesus being born and to make the human side of God recognisable to everyone, St. Francis used a theatrical staging in a cave to recreate the scene of the Nativity on the Christmas night of 1223 in Greccio, Italy. It was as if this festival was given to the faithful for the second time leading to the most beautiful tradition of Christmas: creating and constructing Nativity scenes in churches and town squares.

With time, the Franciscan tradition of Nativity scenes became widespread in Europe. In late 16th century it reached southern Germany. Later, in early 17th century, it was strengthened by the Jesuits who actively endeavoured to spread faith through people`s senses in churches and monastic circles. When the ideas of Enlightenment became dominant, the baroque piety practices including the necessity to arrange Nativity scenes became the target of criticism. After 1782, when the Austrian emperor Joseph II banned Nativity scenes, they moved from churches to private houses. A few years later, this phenomenon was also to occur in Bavaria. All this resulted in the development of a unique, independent and still living tradition of Nativity scenes in the Alpine region in the 19th century.


In Lithuania, the images of the Nativity accompanied the Christianity and the tradition of sculptural Nativity scenes was finally established by the monastic orders when they became stronger. The Franciscans (followed by the Dominicans and the Jesuits very soon) spread the annual tradition to depict the birth of Jesus Christ in churches like it was done that night in Greccio. The following figures made of wood (and, later, of plaster) that would become traditional items were coming to Lithuania from the Alpine region: Mary, Joseph, Infant Jesus, a donkey and an ox, shepherds, and Three Wise Men, that constituted the scene together with the props. Local craftsmen, so-called ‘god-makers’, also used to carve Nativity scenes drawing inspiration from the imported examples. This genre was almost exclusively ecclesiastical. It could not develop during the Soviet era and only survived thanks to the local masters. After Lithuania regained its independence, the tradition of the Nativity scenes was revived. Today it can be seen both in churches and in town squares or private homes during Christmas period.